My name is Alan Carr and I'm the owner of Alan Carr Jaguar Services. Based in North Shields we've been servicing and repairing Jaguar vehicles for over 25 years. As Jaguar enthusiasts we've built a strong reputation for high quality work and fantastic customer service. If you require support with your Jaguar we're sure we can help!

I'm what you would politely call a car enthusiast. The more accurate term might be a car obsessive. But it is that obsession that gives me the passion for what we do and, ultimately makes us so good at it.

As most young boys, I played with cars and couldn't wait to get one. I remember playing in scrap yards as a teenager, amongst the old Minis, Hillman Imps, Ford Anglias, Vauxhall Crestas, etc. The bigger the car, the posher it seemed to be so my interest has always been there. With my interest in cars starting so young, it seemed an eternity before I got my first car, but after passing my driving first time, shortly after turning 17, I became the proud owner of a Vauxhall Viva and it was the best thing I'd ever done.

I appreciate that many people drive around every day, but they don't all decide we want to tinker around under the bonnet! My interest in how cars work came from a member of the family. My uncle was a mechanic in North Shields and I was a frequent visitor, as at that age I didn't really know much about cars. I thought I knew how to drive and luckily, after a few minor scrapes, began to respect that I didn't know that much. Even changing a flat tyre was a bit of a mystery to me. My uncle used to watch me regularly break my car and he would show me how to fix it.

For the love of Jaguars 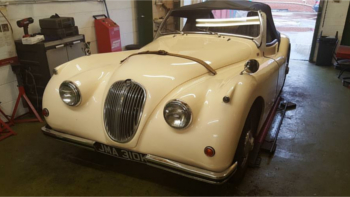 My life then took a sharp turn in a different direction, as I began training as a marine engineer. After serving my time, however, I decided I wanted to be self employed and ended up buying a general dealers and off licence. After a few years though, I sold up and moved down to South Hampshire, working for the Ministry of Defence. It was there that I met a man called Tony Shaw, who used to race E-Type Jaguars, in the 1960s. Tony now ran a garage on Thruxton race circuit with a young man called Jestyn Thomas. This is where I first fell in love with Jaguars.

The three of us became friends, and worked together for many years - repairing, respraying and restoring Jaguars, from the old 3 Series to the new 'up and coming' 340. We even worked on a few E-Types. I began to realise just how much I loved working on all the different cars and was inspired to buy my very own XJ40 3.6 and do it up. I had been well and truly bitten by the Jaguar bug. 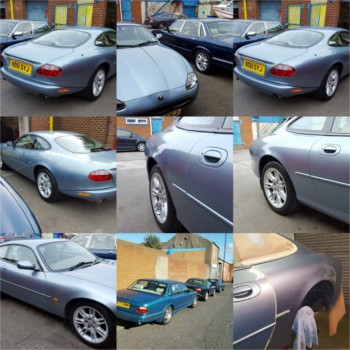 In 1999, I moved back to the North East and decided to set up my own business once more. It wasn't easy, as I was going through a divorce at the same time, but, starting from scratch, I slowly built up, from literally nothing, a clientele who, like myself, prefer Jaguars.

I've constantly invested in new equipment over the years and moved with the times, as obviously new models require specific diagnostics. I now have all the tools and diagnostics to cover most models, from the early models to later models, and after 16 years in the North East, I have many repeat customers.

I have welded, painted, repaired, serviced and diagnosed thousands of Jaguars over the last 25 years and have built up a large network of Jaguar enthusiasts and independent specialists for those hard to find parts.

I treat all my clients' cars as I would my own and I've had several over the years. I've currently got three, so I know it can be costly, but if you repair it properly, it'll last a lifetime.

What makes it all worthwhile, after spending hours prepping, painting and repairing Jags, is when a car drives superbly and looks nice too. I love hearing people sound surprised when I tell them a car is 19 years, or so, old. It's like driving a business cars.

I've occasionally sold Jags I've restored, but I prefer to keep them if I can afford to. Reputation is easy to come by, but a good one takes time, honesty, integrity and lots of hard work. I consider myself privileged to be doing something I love for a living - playing with and driving lots of Jaguars. After all, driving a nice one is like being cuddled by your mother!